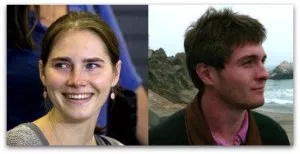 March 27, 2015: Amanda Knox and Raffaele Sollecito have been fully exonerated. There will be no more trials. It’s over.

Meredith Kercher was murdered by Rudy Guede in Perugia Italy, November 1st, 2007. Meredith was a beautiful young woman who had her life stolen from her in an act of pure evil. Amanda Knox and Raffaele Sollecito had absolutely nothing to do with her murder. They are both innocent.